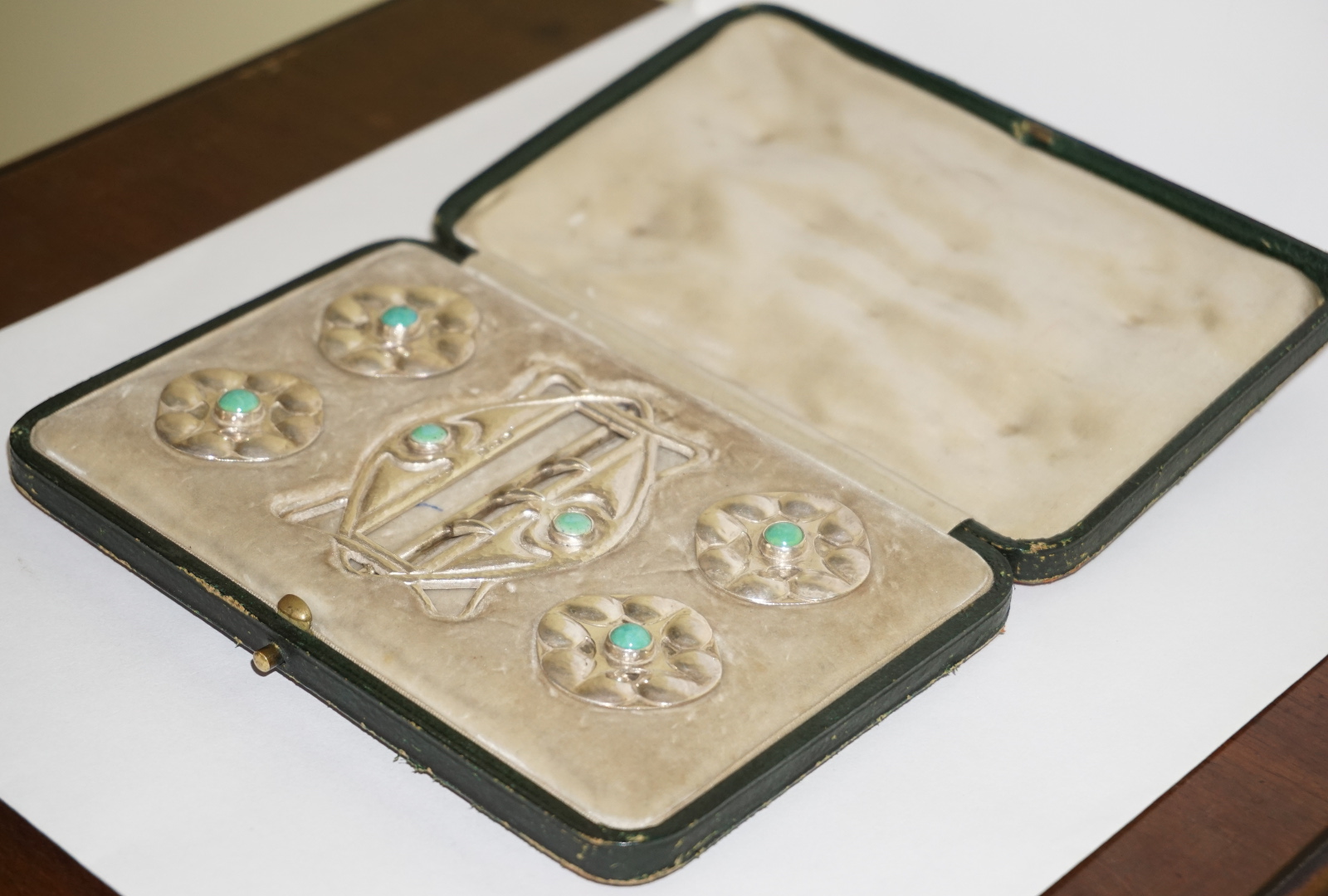 A considerable amount of interest has been expressed in the jewellery made using Ruskin Pottery enamels.

The opportunity has been taken to study the use of these enamels both by jewellery manufacturers and by amateur makers in the often home-based Arts and Crafts environment. Judging by the number of new pieces discovered, the use of the Ruskin enamels was considerable, not so much at the upper end of the market using silver where the use of pottery enamels as against semi-precious stones was probably thought undesirable, but in the Home Arts and Industries sector using pewter.

The period in which such work was done was probably quite an extended one covering most of the lifetime of the factory, from the early years around 1901-2 to the late 1920’s or even the early 1930’s. The glazes used on the Ruskin Enamels were the standard production ones but also known are examples of flambé enamels, almost always mounted in silver. The early enamels using the standard soufflé glazes, often intermixed to resemble natural stones or even glass enamels, are particularly beautiful in effect while the lustre enamels include examples of the yellow and the orange glazes as well as examples of glazes developed after the First World War in the 1920’s such as the delphinium blue lustre. There are also examples of the ochre-blue soufflé developed in the period 1922-27 and matt-effect glazes of the late 1920’s to early 1930’s period. The collector has therefore a very wide range to choose from both in terms of glaze examples and types, colours and styles of mounting.

If the collector wishes only to have Ruskin pieces it is necessary here to issue a word of caution in that the undoubted popularity of the Ruskin enamels led other manufactures with a range of coloured glazes to offer a range of enamels as well. Marked examples are known from Moorcroft, Minton Hollins and Co. and the Kensington Art Pottery, but there are many unmarked examples and few match the Ruskin enamels in quality and richness of colour. From the point of view of the Ruskin collector it is better to avoid pieces which are unmarked or where the mark on the stone cannot be seen, except where the glaze makes the Ruskin manufacture a certainty, as in the High Fired pieces.

Associated with the manufacture of jewellery is the production by the Ruskin Pottery of ceramic buttons. These are often similar in shape and glaze to the enamels but have a small pottery shank moulded into the back to take the thread. The buttons were originally sold in sets attached to the cards and occasionally examples appear on the market but usually individual buttons are found. Again, other manufacturers made such buttons, including Pilkington’s, as well as the other firms mentioned above, and as buttons are not always marked, shape and glaze are important in determining manufacturer.

The History of Ruskin Jewellery

There are examples of roundels and hearts using the early soufflé glazes which employ the earthenware body known as ‘Tocky’ which fires to a rich golden colour. There are examples from the period around 1902 perhaps even earlier and some bear the small impressed ‘WHT’ monogram mark (for marks see ‘Ruskin Pottery ‘The Lost Catalogue’).

Although these may have initially been intended for mounting in domestic metalwork, caskets, light fittings etc. there is no reason which the pieces themselves dictate why they should not have been employed in jewellery. The earliest mention of the enamels is in an article in the Birmingham Daily Post which expands upon an article written for the January 1903 edition of the Pottery Gazette. The Daily Post article reported that, ‘A new departure is the preparation of small round plaques – “roundels”, varying from about three inches in diameter to the size of a small button. These are intended to be introduced as gems or points of colour in decorative woodwork and metal work.’

There is evidence however of production earlier than this in a roundel used in the lid of an inkwell made by Liberty and Co. with the Birmingham silver hallmark for 1901/2 and in a design for a white metal ‘button’ which bears a Registered Number 388979 dating it back to 1902. This design of a circular flower-form enclosing a central stone is known in various sizes used in the forms of brooches, hatpins and cloak clasps. It bears the Registered No. in an impressed oval and in another oval impressed ‘The Guild Button Ns.E.S.’ (See illustration).

From a slightly later period entries in the catalogue of the 12th Spring exhibition held in 1905 at the Cartwright Memorial Hall, Bradford indicate that the silversmith Bernard Cuzner of Bourneville, Birmingham, then just starting his career, mounted Ruskin enamels as included in the case of gold and silver wares which he exhibited were the following two items: